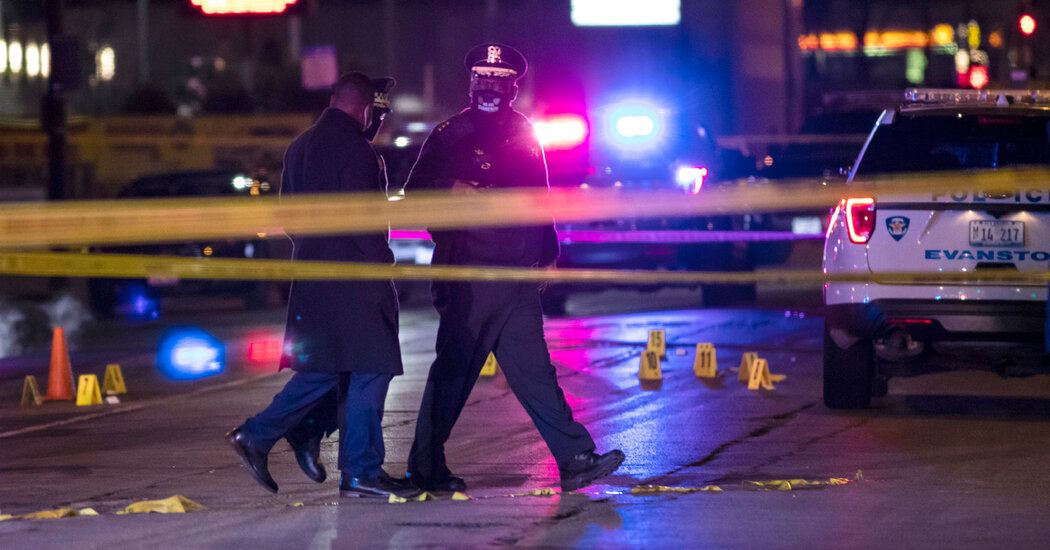 A deadly shooting spree on Saturday that started in Chicago and ended in a shootout in nearby Evanston, Ill., left at least four people dead, including the suspected gunman, and at least four others critically wounded, the authorities said.

The suspect was killed in a shootout with Evanston police officers after a rampage that targeted seemingly random victims, including a 15-year-old girl who was shot in the head while riding in a car with her mother, and a woman who was taken hostage in a restaurant before being shot by her captor.

Among the dead were a building security guard and a University of Chicago student, whose body was found in a parked car.

The student was identified as Yiran Fan, a 30-year-old graduate student originally from China, the University of Chicago confirmed on Sunday. None of the other victims have been identified.

The Chicago police superintendent, David Brown, identified the suspect as Jason Nightengale, 32, of Chicago. Superintendent Brown said at a news conference on Saturday night that the shooting spree began just before 2 p.m., when the suspect entered a South Side parking garage and shot a man sitting in a car, killing him.

Minutes later, Superintendent Brown said, Mr. Nightengale entered an apartment building and began firing, killing a security guard and critically wounding a 77-year-old woman. He then walked to another apartment building where he held an acquaintance at gunpoint, demanding the man’s car keys.

From there, Superintendent Brown said, Mr. Nightengale drove to a convenience store, where he shot and killed a 20-year-old man and critically wounded an 80-year-old woman.

Mr. Nightengale is also suspected in the shooting on Saturday of the 15-year-old girl, who is in critical condition, Superintendent Brown said. From there, the suspect headed north to Evanston.

At 5:38 p.m., Mr. Nightengale fired shots inside a CVS drugstore in Evanston and then went to a nearby IHOP, where he took a woman hostage before shooting her in the head, according to Evanston’s police chief, Demitrous Cook. The woman had initially been listed in critical condition, but some news outlets were reporting on Sunday that she had since died.

The rampage came to an end soon after, when the police, responding to reports of a disturbance at the CVS, confronted Mr. Nightengale in a parking lot, shooting and killing him.

“But for the brave conduct of Evanston police officers confronting the suspect, many more people would have been injured,” he said. “So we should take our hats off to Evanston P.D. and the hardworking officers of the Chicago Police Department for their investigation as we continue to look for motives and other reasons for this happening.”

Mr. Brown said that the investigation was still in the preliminary stage and did not comment on a possible motive.

The student newspaper at the University of Chicago, The Chicago Maroon, reported that the man found dead in a car in the parking garage was enrolled in the school.

In a post on Twitter, the university said, “It was with great sadness that we informed our community tonight that a current student of the university was shot and killed.”

“This is deeply painful news for our community and South Side neighborhood,” the university said.