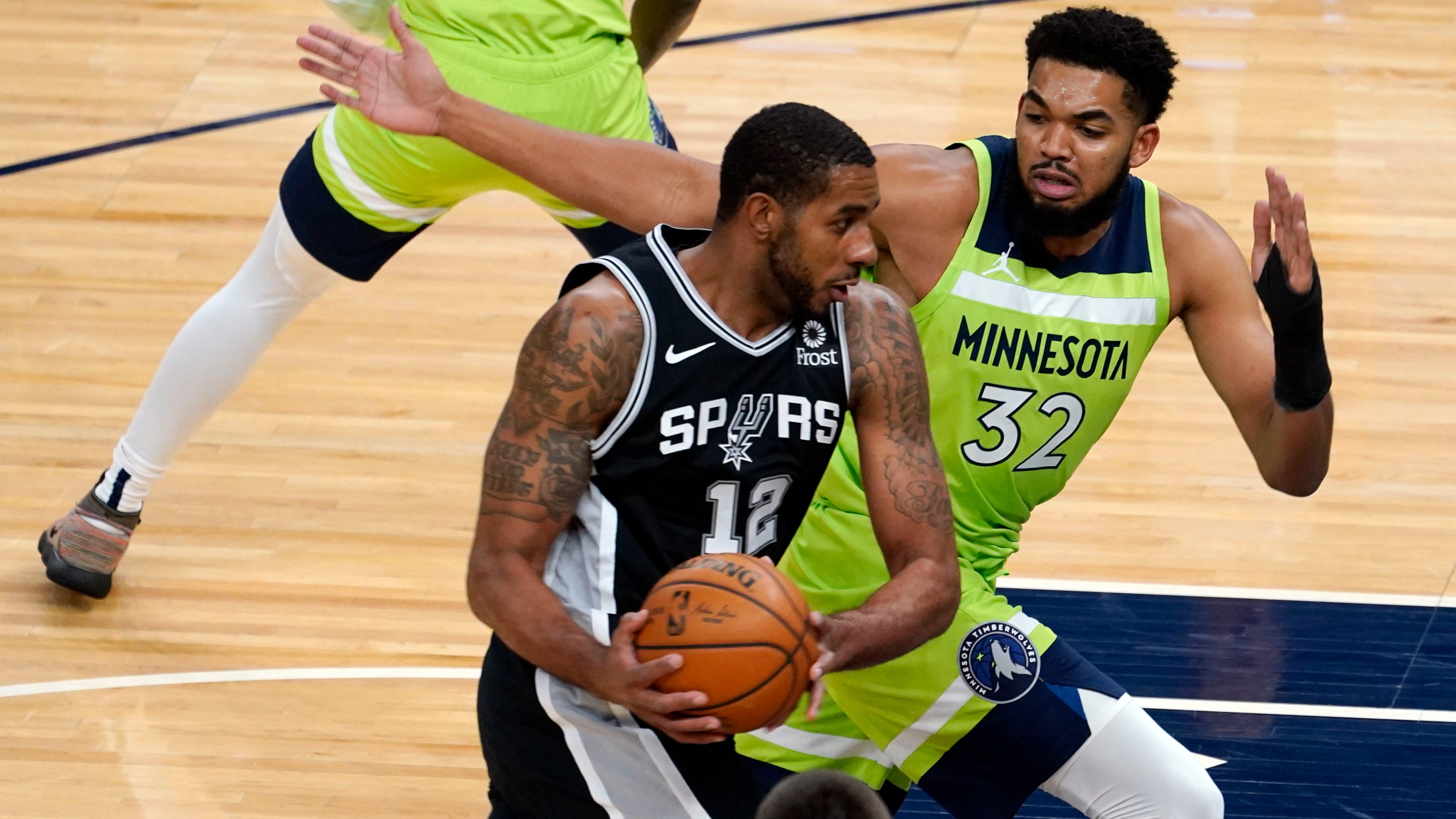 DeRozan, who went 13 for 23 from the floor and 12 of 13 from the line, had 13 points after the third quarter and keyed San Antonio’s third straight victory with his relentless drives to the basket. This matched his most points in three seasons with the Spurs, also done on Jan. 29, 2020, against Utah.

“When the game is close, I feel like it’s imperative and my job to go out there and make something happen and pull out a win,” said DeRozan, who did not attempt a shot in the first quarter. “You kind of look at it like playing ‘Connect Four,’ understanding what moves are going to put you in the best position when them slots start closing up on you.”

Towns, who missed the last six games with a partial dislocation of his left wrist, had 25 points and 13 rebounds in 37 minutes as Minnesota’s losing streak hit seven games. He said the original timetable for his injury recovery was six to eight weeks.

“I tried to rush as hard as I can to be here for this team,” Towns said, “even if it required playing with one hand.”

Malik Beasley scored 29 points on 7-for-11 shooting from 3-point range, his last make pulling the Timberwolves within three points with 37 seconds left. Towns grabbed a miss by DeRozan on the other end, but rookie Anthony Edwards needlessly drove to the basket and had his desperation kick-out pass intercepted by LaMarcus Aldridge.

Minnesota made three go-ahead 3-pointers over the last 2:14 of regulation, by Edwards, Towns and D’Angelo Russell, but DeRozan fearlessly answered with nine points in the last 1:29.

The highlight was a three-point play with 55 seconds remaining that gave San Antonio a 109-107 lead, when he drove by Edwards, drew the hand-check foul and converted a playground-style up-and-under layup to evade the long arms of Towns.

“He’s a beast. That’s DeMar. … We believe in him. We’re really, really confident in him,” said Dejounte Murray, who had 22 points and 14 rebounds.

After DeRozan made a pair of free throws with 12 seconds to go, the Timberwolves had the last shot, but Russell’s forced top-of-the-key try in a crowd bounced off the rim.

“That’s the stick-to-it-ive-ness, the fiber that you need to have,” Spurs coach Gregg Popovich said.

Spurs: Patty Mills scored 21 points on 5-for-8 shooting from 3-point range. He’s hitting 56.9% this season from long distance. … Backup big man Drew Eubanks was not with the team due to COVID-19 health and safety protocols. Assistant coach Becky Hammon and another staff member were also absent for quarantine requirements.

Timberwolves: Naz Reid, back in a bench role with the return of Towns, had 16 points in 16 minutes. … Edwards had 13 points, half of the career high he posted on Thursday at Portland. … Josh Okogie (strained left hamstring) missed his sixth straight game.

The Timberwolves lost their six games without Towns by an average margin of 20 points, sorely lacking his production in the post as well as his rim protection.

Towns, with a dark blue cast on his forearm and hot pink Nikes on his feet in the ultimate clash with the team’s alternate neon green uniforms, wore a grimace, too, as he worked through the lingering discomfort. He had 12 points in a nine-minute stretch of the third quarter.

“We’ve got to be able to play hard whether he’s playing or not,” Beasley said.

Rookie point guard Tre Jones, who turned 21 on Friday, did not play in his first homecoming game. The second-round draft pick from Duke won Minnesota state championship games at Target Center with Apple Valley High School in 2015 and 2017.

Spurs: After finishing the back-to-back set against the Wolves on Sunday, San Antonio finishes a five-game road trip at Oklahoma City on Tuesday.

Timberwolves: After the rematch with the Spurs, Minnesota continues this four-game homestand against Memphis on Wednesday.