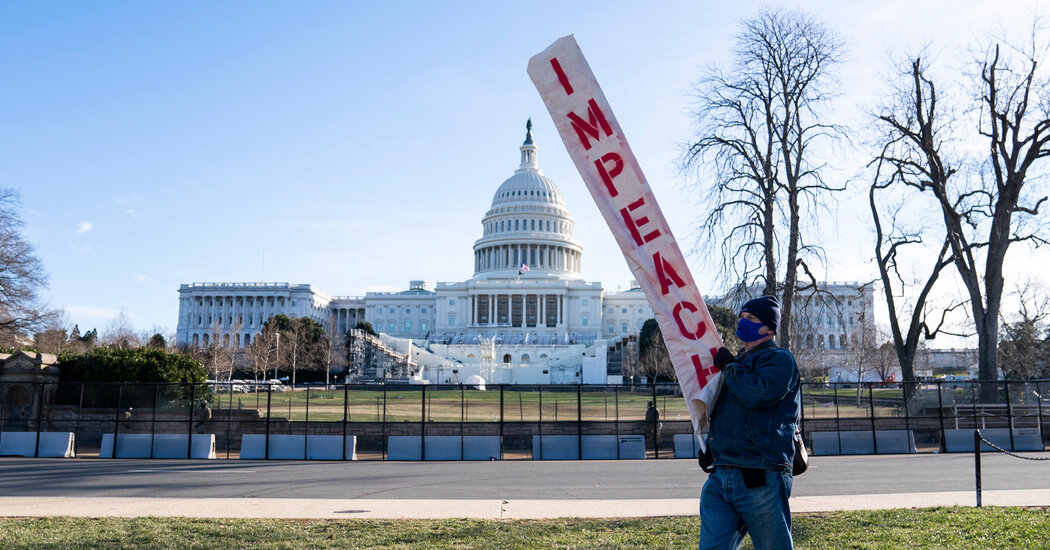 Yet the timing of such an effort, with just 11 days until Mr. Trump is to leave office, scrambled the equation. Senator Mitch McConnell of Kentucky, the Republican leader, indicated that under Senate rules a trial could not begin until Jan. 19, the day before President-elect Joseph R. Biden Jr.’s inauguration, meaning the process would not advance quickly enough to avert any feared dangerous moves in Mr. Trump’s last days in power.

That raised the prospect of conducting a trial after Mr. Trump vacates the White House, overshadowing the opening days of Mr. Biden’s administration at a time when he would like to turn the page and confront crises like the coronavirus pandemic, which has grown even deadlier while attention has focused on Washington’s political wars. A nationally televised trial could dominate discussion and would prevent other business in the Senate.

Some of Mr. Trump’s critics argued that it would be important to hold a trial even if he is already out of power in order to bar him from ever seeking office again, a penalty envisioned by the Constitution — and perhaps more important, to render a verdict condemning his actions for the sake of history.

“We’ve never had to consider even the possibility of impeaching a president twice, or in the final days of his presidency,” said Michael J. Gerhardt, a constitutional scholar at the University of North Carolina who testified in Mr. Trump’s first impeachment and favors another trial. “But we’ve never had a president before who’s encouraging sedition as Trump has done in his last few days in office.”

Yet even some of the president’s harshest critics worried that a last-minute impeachment and an overtime trial could help him rally supporters by presenting himself as a victim not a villain, allowing him to turn the focus from his own actions to those of his opponents.

“It historically will be important,” said Andrew Weissmann, who was a deputy to the special counsel Robert S. Mueller III and recently published a book, “Where Law Ends,” expressing frustration that the president was not held fully accountable for his actions during the Russia investigation. “But the danger is he is acquitted and the momentum of condemnation now is lost. Plus, until we change the mentality of his base, we have not gotten at the underlying issue.”