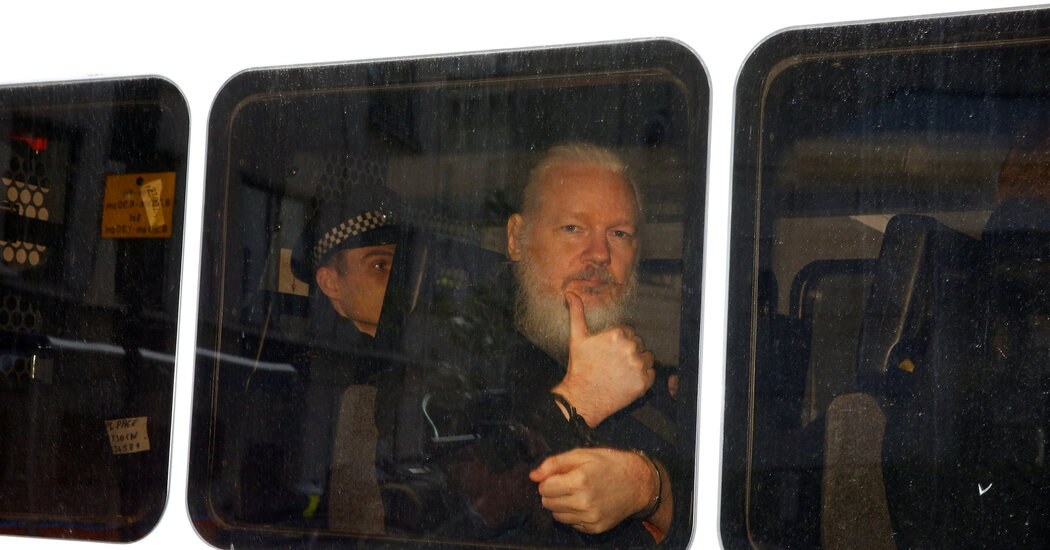 WASHINGTON — Allies of the WikiLeaks founder Julian Assange have ramped up a push for a last-minute pardon from President Trump, enlisting a lobbyist with connections to the administration, trying to rally supporters across the political spectrum and filing a clemency petition with the White House.

The effort comes at a delicate moment for Mr. Assange and during a period of tension between the United States and Britain over a case that his supporters say has substantial implications for press freedoms.

The Justice Department announced last week that it would appeal a British judge’s ruling blocking the extradition of Mr. Assange to the United States to face trial on charges of violating the Espionage Act and conspiring to hack government computers. The charges stemmed from WikiLeaks’s publication in 2010 of classified documents related to the wars in Afghanistan and Iraq.

Mr. Assange’s supporters had been optimistic about the prospects of a pardon from Mr. Trump, who has issued dozens of contentious clemency grants since losing his re-election bid. But they now worry that pressure over his supporters’ ransacking of the Capitol last week could derail plans for additional clemencies before he leaves office on Jan. 20.

As unlikely as the prospect of a pardon from Mr. Trump might be, Mr. Assange’s supporters are eager to try before President-elect Joseph R. Biden Jr. takes office.

As vice president, Mr. Biden called the WikiLeaks founder a “high-tech terrorist.” Some of his top advisers blame Mr. Assange and WikiLeaks for helping Mr. Trump win the presidency in 2016 by publishing emails from Democrats associated with Hillary Clinton’s campaign, which U.S. officials say were stolen by Russian intelligence to damage her candidacy. Mr. Trump has long downplayed Russia’s role in the 2016 election.

For Mr. Assange’s supporters and press freedom advocates, though, the issues at stake transcend him or politics.

“This is so much bigger than Julian,” said Mark Davis, a former journalist who worked with Mr. Assange in Australia, where they are from. If Mr. Assange is prosecuted, “it will have a chilling effect on all national security journalism,” Mr. Davis said, adding: “If we can get Julian off, then the precedent hasn’t been set. If Julian goes down, then it’s bad for all of us.”

Mr. Davis, who is now a lawyer specializing in national security and whistle-blower cases, is on the board of Blueprint for Free Speech, an Australia-based nonprofit group that advocates for press freedoms and whistle-blower protections. The group, which was started by Suelette Dreyfus, a former journalist who is an old friend and collaborator with Mr. Assange, signed a pro bono contract on Saturday with the lobbyist Robert Stryk to seek a pardon for Mr. Assange.

He has worked for a jailed Saudi prince who had fallen out of favor with his country’s powerful de facto leader, as well as the administration of President Nicolás Maduro of Venezuela, which the Trump administration considers illegitimate. Mr. Styrk also worked for Isabel dos Santos, the daughter of Angola’s former president, who is accused of embezzling millions of dollars from a state oil company she once headed, as well as the government of the former Congolese president Joseph Kabila, which had faced American sanctions for human rights abuses and corruption.

Mr. Stryk said that he was representing Blueprint for Free Speech to seek a pardon for Mr. Assange without pay because of his belief in free speech, and that he would continue pushing for the pardon in the Biden administration if Mr. Trump did not grant it.

“This is not a partisan issue,” Mr. Stryk said.

The contract, which he said he had disclosed to the Justice Department under the Foreign Agents Registration Act, calls for his company, Stryk Global Diplomacy, to “facilitate meetings and interactions with the president and the president-elect’s administrations” to “obtain a full pardon” for Mr. Assange.

Mr. Davis said Mr. Stryk had been chosen partly because of his entree into Mr. Trump’s administration, which the group sees as its best chance to secure a pardon.

Mr. Davis noted that Mr. Assange, 49, was indicted during Mr. Trump’s presidency. “We are unabashedly reaching out to the Republican Party on this issue in the final weeks to correct something before it’s too late, and before it become part of Trump’s legacy,” Mr. Davis said.

He said, “If Joe Biden is sympathetic, that’s well and good, and we certainly hope he is.” But, he added, “it’s a far simpler process for an outgoing president than an incoming president.”

Mr. Assange’s cause has been taken up by a range of media freedom and human rights organizations, public officials and celebrities, including the actress Pamela Anderson.

Blueprint for Free Speech is working to harness some of that support, including from Ms. Anderson, a friend of Mr. Assange, who said in an interview that she had been trying to connect with Mr. Trump to plead the case. “I just hate to see him deteriorate in jail right now,” she said of Mr. Assange, describing the pardon push as “a last-ditch effort for all of us who are Julian Assange supporters.”

Asked about the effort by Blueprint, Jennifer Robinson, a lawyer representing Mr. Assange, said he “is encouraged by and supports efforts” by a variety of prominent supporters around the world.

Mr. Davis stressed that Blueprint’s push was independent of parallel efforts by Mr. Assange’s family and his lawyers, though Mr. Stryk has been in contact with Barry J. Pollack, Mr. Assange’s Washington-based lawyer, who is representing him against the criminal charges.

Prosecutors have argued that Mr. Assange unlawfully obtained secret documents and put lives at risk by revealing the names of people who had provided information to the United States in war zones.

Mr. Assange’s lawyers have framed the prosecution as a politically driven attack on press freedom.

Last month, Mr. Pollack filed a petition for a pardon with the White House Counsel’s Office, which has been vetting clemency requests for Mr. Trump, arguing that Mr. Assange was “being prosecuted for his news gathering and publication of truthful information.”

Mr. Pollack declined to comment on the petition, which was obtained by The New York Times, except to say that it was pending.

The petition appears to be geared toward appealing to Mr. Trump, who has wielded the unchecked presidential clemency power to aid people with personal connections to him or whose causes resonate with him politically, including a handful of people ensnared in the special counsel’s investigation of Russia’s interference in the 2016 election and ties to his campaign.

The petition highlighted that the charges against Mr. Assange stemmed from WikiLeaks’s publication of material that “exposed misconduct committed in Iraq and Afghanistan during wars initiated by a prior administration.” And it notes that the Democratic emails published by WikiLeaks in 2016, which showed some in the party apparatus conspiring to sabotage the campaign of Senator Bernie Sanders, Independent of Vermont and Mrs. Clinton’s rival for the Democratic presidential nomination, resulted in the resignations of party officials.

The petition does not address the United States government’s findings about Russia’s role in the theft of the emails as part of its effort to undermine Mrs. Clinton, which has long been a sore spot for Mr. Trump.

The petition notes that the sentence of Chelsea Manning, the former Army intelligence analyst who provided the military and diplomatic documents to WikiLeaks that led to the charges against Mr. Assange, was commuted by President Barack Obama in the final days of his term.

Like Mr. Assange’s lawyers in Britain, Mr. Pollack’s petition raises concerns about Mr. Assange’s health, noting that the prison in which he is being held has been under lockdown after a coronavirus outbreak.