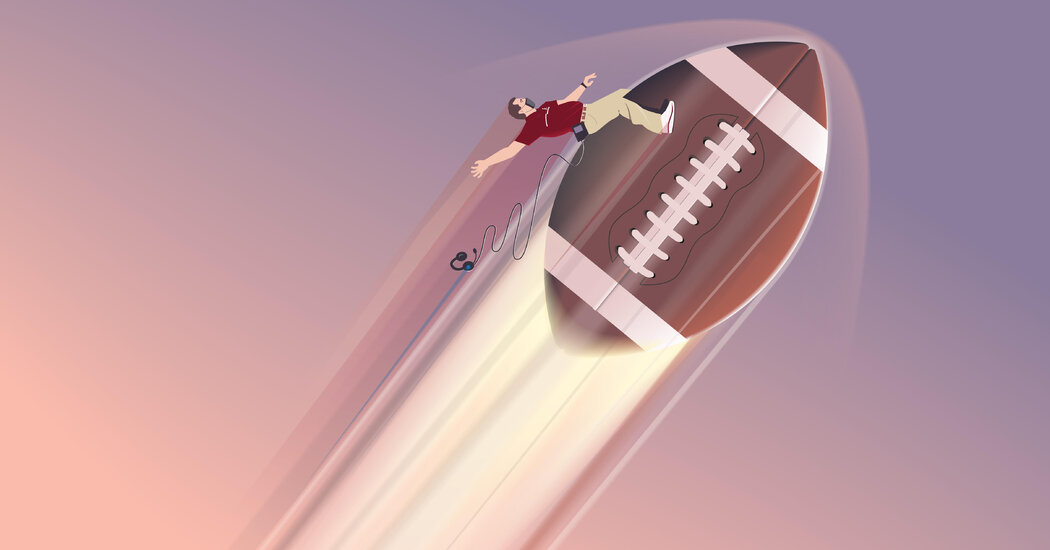 Nick Saban, of all people, was worried.

He had resurrected the University of Alabama’s proud football program from a deep downswing. He was routinely conquering college football with fearsome rushing attacks and hard-hitting defenses. Forget the governor: There was no more commanding figure in the state than the football taskmaster in Tuscaloosa.

But by the middle of the 2010s, Saban was fretting over the speedy, run-pass-option-loaded offenses that were taking hold across the sport and flummoxing his defenses.

“We were struggling with sort of this new age of football,” Saban said in October. “So that’s when we started to figure out that, hey, if you can’t beat them, you better join them.”

Join them Alabama has. An offensive renaissance unlike any other to erupt from Tuscaloosa has overtaken Saban’s program.

The school that has long relied on a grinding running game still generated enough rushing this season that its starting tailback, Najee Harris, placed fifth in the Heisman Trophy voting. But since 2018, the season after Alabama last won a title, the Crimson Tide offense has passed for 13,495 yards; it threw for 14,595 yards across Saban’s five championship seasons there.

Now Saban can tie Bear Bryant for the most national titles of any Alabama coach on Monday night, when the top-ranked Tide will play No. 3 Ohio State in the College Football Playoff’s national championship game.

The offensive shift by Saban — famous as he is for his defenses and his fealty to routines as mundane as eating two Little Debbie Oatmeal Creme Pies for breakfast — is a window into how he has remained relevant and largely unrivaled as he nears the end of his 25th season as a college head coach.

“He stays with his principles, his same methods, his same theories, his same approach of being a perfectionist,” said Mark Ingram, the Baltimore Ravens running back who won a national title and the Heisman when he played for Saban at Alabama in 2009. “He stays that way. But the game evolves, and you have to be able to evolve and adapt with it. I think he’s done a tremendous job of doing that, no matter what era it is, no matter what kind of style is being played.”

Considering the Alabama coach’s tactics now, Steve Spurrier, a member of the small fraternity of coaches with a winning record against Saban and the architect of the Fun ‘n’ Gun offense that catapulted Florida into a national power, said impishly: “He may have said a good passing attack can beat good defenses.”

The Alabama offense that will take the field on Monday night in Miami Gardens, Fla., still runs on more than half of its offensive snaps. But while Alabama routinely gained 5 or 6 yards a carry during Saban’s 14-season tenure, its passes have gone much farther in the last few years. Alabama is now picking up about 11 yards per passing attempt, 36 percent more than in 2017. Scoring has gone way up, with this season’s team averaging about 48 points a game. Until 2018, no Saban team at Alabama had averaged more than 39 points a game.

In the last three years, Alabama has set program records for more than a dozen offensive metrics.

“The principles of it haven’t changed,” said Mike Locksley, the University of Maryland coach who was Alabama’s offensive coordinator in 2018. “Being able to throw the ball efficiently is no different than running it efficiently, and whether it’s R.P.O.s or screens or the bubble screen and all the things that that offense now does, they’re just doing it very efficiently. I think it’s opened up their ability to still do what it ultimately takes to win, which is run the ball.”

The offensive line has 126 career starts and has made enough holes for Alabama to score 35 rushing touchdowns this season, tied for second in the country. Harris has run for 1,387 yards and is, to Spurrier’s eye, both the best running back in the country and the most underrated member of the Alabama offense, which Steve Sarkisian, who was recently hired to coach the University of Texas, has guided for two seasons.

DeVonta Smith, the first wide receiver to win the Heisman in nearly 30 years, has caught 105 passes for 1,641 yards and 20 touchdowns. Quarterback Mac Jones has been the most accurate passer in college football this season, completing 77 percent of his throws for 4,036 yards.

“We used to have plays that stretched the field, but I just think they stretch the field a lot more: a lot of spread formations, a lot more out of the gun, a lot of ‘three receivers, one back’ — a hybrid tight end,” Ingram said. “They’re spreading the field out, putting a lot of stress on the defense with vertical pass routes, underneath pass routes. It’s just a lot different.”

Some believe the birth of Saban’s revolution came when quarterback Johnny Manziel was lighting up the scoreboard for Texas A&M. When his team nearly defeated Alabama in 2013, Manziel passed for 464 yards. The Crimson Tide defense yielded a combined 79 points in losses to Auburn and Oklahoma at the end of that season, and Alabama gave up 630 yards to Auburn in the Iron Bowl rivalry game in 2014.

Saban has suggested he reconsidered his approach because Hugh Freeze, then the coach at Mississippi, had used high-powered offenses to beat Alabama in 2014 and 2015.

“He just got to the point of watching it work against him,” said Lane Kiffin, the Alabama offensive coordinator from 2014 through 2016 who is now Mississippi’s coach. “He just said, ‘All right, well, if these things are working against me, instead of just complaining about them to the officials all the time, I’m going to start doing them.’”

Kiffin added: “That wasn’t as easy as it sounds because he’d been doing it one way a long time. So it wasn’t just walking in and changing whatever you want. It sounded good at first, but then there are some growing pains in that, too, because you’ve got to get used to some plays not working and kind of looking ugly sometimes.”

In 2014, for instance, Alabama logged 6,783 yards of offense, then the highest total for a Saban-coached team. Still, Alabama mustered fewer points per game than it had for a few seasons.

But through changes in the roster and his staff, which is known for its turnover as assistants move to higher jobs at other programs, Saban stuck with the idea of upending the playbook. If anything, the movement of people around him might have helped.

“He spends quite a bit of time in the off-season doing research and development,” Locksley said. “One of the great things that has happened, I guess, for him, is that when he does lose coaches and he’s able to bring in coaches and interview guys for jobs, he’s able to hear and see and learn what other people are learning.”

Saban said last week that his principal goal was to “feature the players that we have on our team and adapt to the style that would best help them have success.”

Indeed, Preston Dial, a tight end for Saban’s first four seasons at Alabama who now watches the offensive play-calling in wonder, said he did not believe Saban had at his core a preference for one style or another. He just wants to win.

“He’s definitely playing with the chess pieces he has, but he’s one of the best at learning from the pieces and being able to correlate who can do what,” Dial said. “I truly think that he’s got the horses to completely confuse, baffle and overwhelm defenses through the air, and so he does it.”

Saban, 69, is under contract at Alabama until the end of the 2025 season and has said he expects to finish his career there.

And in almost certainly bad news for the rest of college football, his reinvented offense is very likely seeding future juggernauts. Although the university attracted elite wide receivers, including Julio Jones and Amari Cooper, before Alabama so conspicuously embraced electrifying wideout play, coaches said they expected more prospective stars would be able to envision themselves at Alabama given the passing output and Smith’s Heisman win.

“We were sort of Wide Receiver U. back in the ’90s and 2000s, and those guys were really good,” Spurrier recalled fondly the other day.

“Gosh, now you’d almost have to say Alabama is the Wide Receiver U.”