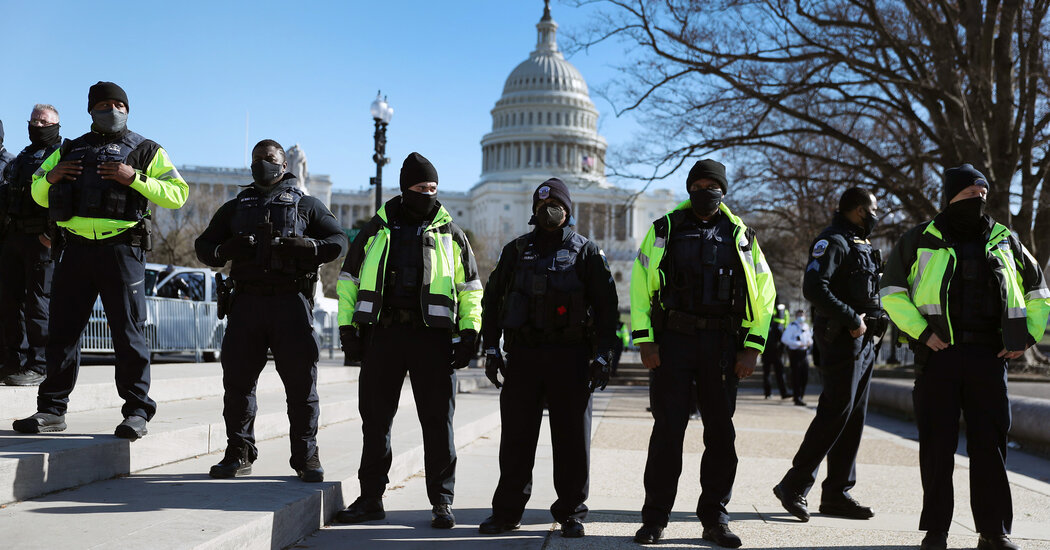 In a separate statement, Representative Jason Crow, a Colorado Democrat and former Army Ranger, said he had spoken with military officials who were aware of “possible threats posed by would-be terrorists” in the coming days and were working with local and federal law enforcements officers to prevent them.

Even as the throng of hundreds — if not thousands — breached gates, smashed windows and stormed into the Capitol last week, there were also tense standoffs at statehouses in Kansas, Colorado, Oregon and Georgia. On Saturday, that trend seemed to continue as Senator Charles E. Grassley, Republican of Iowa, said he was told of a “disturbing report of a death threat” received on Friday by the Iowa Democratic Party.

On Monday, the Michigan Capitol Commission is scheduled to meet to consider banning guns from the building. In April, in a kind of dress rehearsal for the chaos in Washington, a group of gun-toting protesters decrying coronavirus lockdowns rushed the State Capitol in Lansing, not long after Mr. Trump tweeted, “Liberate Michigan.”

Armed with federal warrants, law enforcement officers spent much of the weekend cracking down on members of the mob in Washington, making a series of arrests in states from Iowa to Florida, and filing new charges against some of the more than 80 people who were taken into custody last week by local officers in Washington. Among those charged so far have been a man seen hauling off House Speaker Nancy Pelosi’s lectern; the leader of the Hawaii chapter of the far-right nationalist group the Proud Boys; and a proponent of the QAnon conspiracy theory known for showing up at pro-Trump rallies in a headdress with horns and a spear.

On Saturday, federal prosecutors filed a new complaint against Cleveland Grover Meredith Jr., a Georgia man who was accused of threatening Ms. Pelosi by saying in a text message that he was going to put “a bullet in her noggin on Live TV.” Federal agents said that Mr. Meredith had been staying at a Holiday Inn in Washington and had weapons in his camper-style trailer that included a Glock handgun, a Tavor X95 assault rifle and hundreds of rounds of ammunition.

On Sunday, prosecutors brought charges of violent entry and disorderly conduct against a figure who had first been identified online by civilian sleuths: Eric G. Munchel of Nashville. In a photograph that circulated widely after the attack, Mr. Munchel, 30, was pictured wearing tactical military gear and carrying a handful of plastic restraints known as zip ties.

Prosecutors in Washington also filed a complaint Sunday on similar charges against Larry R. Brock, a retired Air Force officer from Texas, saying he too had been carrying plastic restraints.