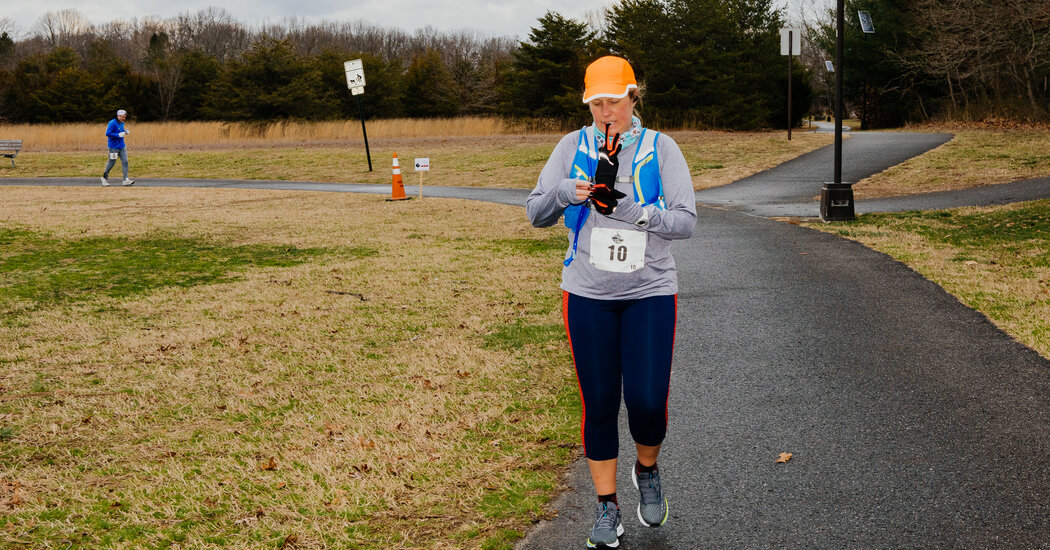 But running and reporting would be a logistical challenge.

I overpacked: too many changes of clothes, too much food, too many backup battery chargers for my phone. I brought a hydration vest to run in, not only so I could have water whenever I wanted, but because it had pockets. I had one baggie of Newman-O’s vanilla cookies, which I would refill from a stash in my car throughout the event. In another baggie, I kept a small spiral notebook, two pens and one pencil in case the ink in those pens froze.

The race was held on a paved loop just short of a mile; whoever clocked the most mileage inside the time window would be the winner. We ran laps, which meant I saw the same people over and over. I interviewed as many runners as possible early on, when we were fresh, excited and coherent.

Since it was such a long race, runners moved more slowly than they typically would in something like a marathon, and many — myself included — walked at least part of the time. When I saw other runners walking, I’d catch up and walk at their pace and do the interview along the way. In my phone, I kept a log of what I saw, what I listened to, what I ate and when I changed my clothes. I chose shorts and tights with pockets along the thigh designed specifically for the phone. I have an old iPhone with a less-than-reliable battery that dies even faster in cold weather, unless it’s as close to my body as possible.

Even though the reported version of the race clips along at a reliable speed (so I hope), the race itself was very long and — to be blunt — boring. While the need to report on the experience was always hovering over me, most of the time I was left to worry about myself: Are my socks wet? How’s that blister doing? Is that normal race pain or injury race pain? Is this over yet? When will this be over? I listened to six podcast episodes, one audiobook and half of the Bleachers’ album “Gone Now” when I wasn’t talking to other runners or the volunteers.

Near dawn, after a restless three-hour snooze inside a sleeping bag in my car, I went back out on the course for another three and a half hours. If runners didn’t want to talk to me, I didn’t bother them. I was already in agony, and I had slept; many of them hadn’t. If I saw runners walking — and they were open to it — I did talk to them again, which is how I ended up walking two full laps with Michael “Gagz” Gagliardi, the eventual winner, who did 125 laps for 123.87 miles. I was foggy then, so I called him after the race to make sure my memory was accurate. That led him to tell me things that he had been too frozen to tell me on the course, including how he had gotten through the night by reminding himself that, with every passing hour, another part of the world was celebrating the New Year.

After the race, I went home, had a shower and a beer, and slept for four hours. After ordering takeout and watching a few episodes of “The Flight Attendant,” I fell asleep for another 10.

Ten days later, I’m still a little creaky. I haven’t even started thinking about my next race, but I find my mind drifting to what I might do next.

Hopefully I won’t need the pencil next time.

Jen A. Miller is the author of “Running: A Love Story” and writes The Times’s running newsletter. Sign up at nytimes.com/newsletters/running.