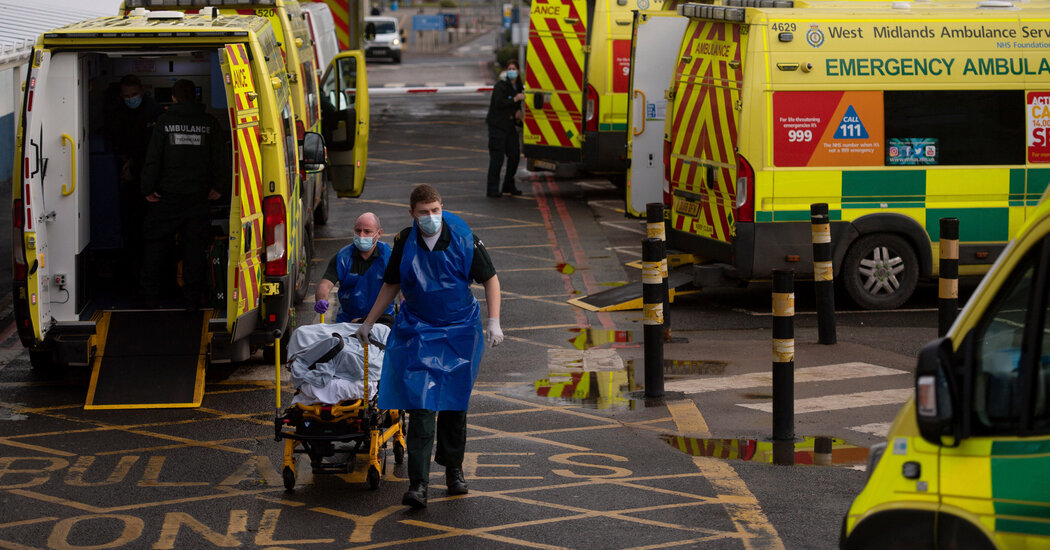 More people died in Britain last year than in any year in the past century, surpassing even the toll during the 1918 pandemic, the government’s statistical agency reported on Tuesday. And with around 90,000 more deaths than expected, it was the highest number of excess fatalities recorded since World War II.

But as terrible as the toll has been, officials are warning that the worst is yet to come, as a recent explosion in new infections translates into more hospitalizations and more deaths.

As a new, more contagious variant of the coronavirus continues to tear through Britain — with an estimated one in 30 people in London currently infected — hospitals are on the verge of being overwhelmed, even as authorities struggle to convince the public of the urgency of the moment.

Prime Minister Boris Johnson — who came under criticism Tuesday for cycling seven miles from his home at 10 Downing Street despite orders that people stay close to where they live — met with his cabinet on Tuesday to discuss ways to tighten what are already some of Europe’s most sweeping restrictions.

All pubs, restaurants and retail stores are already closed, school reopenings have been delayed and public gatherings are forbidden. People have been told they should leave their homes only for essential reasons like food shopping and exercise.

There are not many levers left to pull. Police have said they have issued some 45,000 fines and will increase enforcement, and the public messaging campaign is being stepped up. There are calls for supermarkets to crack down on customers who refuse to wear masks, but many people are still ignoring the rules.

Martin Hewitt, the National Police Chief Council, said that a “stubborn minority” continue to flout the rules and police would not hesitate to penalize them for putting the health of the nation at risk.

There has been one recent encouraging sign. After rising steeply for weeks, the number of infections has begun to drop. Around 45,000 were reported on Tuesday — significantly less than the recent peak of more than 80,000.

Still, officials warned that the full effects of gatherings held around the Christmas holiday had yet to be felt, and as hospitalizations continue to rise, the crisis in the hospitals is growing more acute by the hour.

There are more than 35,000 Covid-19 patients in the hospital, some 14,000 more than in the bleakest period of the spring. Even if the rate of new infections slows significantly, hospitals in London could face a shortage of 2,000 beds by Jan. 19, according to a briefing by doctors in London to the National Health Service.

More than 3,000 patients were on ventilators as of Jan. 8, according to government data.

Daily deaths are approaching the heights reached in the spring, with the toll on Monday reported to be 1,243 fatalities. Some hospitals have been forced to erect temporary morgues after mortuaries ran out of space. The death toll is expected to grow steadily in the weeks ahead.

Ambulance crews, who for weeks have been racing across London to find beds for desperately sick Covid patients, are stretched to the breaking point. Hundreds of police and firefighters have been diverted to their ranks to keep the services running.

Exhausted health care workers are struggling to cope with the surge in patients at the same time as they are being asked to help carry out the most ambitious vaccination campaign in the nation’s history.

Jeremy Hunt, the chair of the Health Select Committee in Parliament and a former health secretary, said that the country’s vaunted National Health Service was on the verge of collapse.

“I think the N.H.S. will, in the end, find intensive care — critical care beds for all those that need it — but it is on an absolute knife edge,” he told the BBC Radio 4’s World at One.

Perhaps even more critical than a shortage of intensive care beds is the lack of trained staff to tend to the patients there. Many health care workers are being forced to divide their time among an ever growing number of patients, hospital officials have said, inevitably hurting the quality of care.

The death toll in Britain surged past 81,000 this week, the highest in Europe. And that figure did not capture the full scope of the suffering.

There were close to 697,000 deaths in Britain in 2020 — nearly 91,000 more than the average in the previous five years. The 15 percent increase is the largest rise in excess deaths for more than 75 years, according to the BBC. That figure suggests that the death toll from Covid is higher than the official toll.

The failure to contain the spread of the dangerous variant of the virus — first identified by researchers in Britain but now spreading in dozens of countries — has raised questions about whether people’s movements need to be restricted even further. But the success of any government-ordered restrictions depends largely on people following the rules.

“Most people are doing the right thing to keep each other safe, but sadly a small minority of people continue to flagrantly ignore the rules, for example by holding house parties, meeting in basements to gamble or breaking into railway arches for unlicensed raves,” Cressida Dick, the commissioner of the Metropolitan Police Service, wrote on Tuesday in The Times of London.

With fears that the virus is spreading in supermarkets — one of the few places people can mix in public — there were renewed calls by government officials for more strict enforcement of mask wearing.

Even now, mask wearing in Britain is far from universal. It is not required outdoors and is not always enforced indoors.

Some of the nation’s largest chains vowed to clamp down on mask compliance, with several reintroducing guards at the entrance to stores. But the British press on Tuesday was filled with pictures of people flouting the rules.

And there was yet one more reminder of the financial cost of the ongoing crisis on Tuesday when the British Retail Consortium reported that 2020 was the worst year on record for retailers.

Even the Royal Mail is being impacted, with service likely to be scaled back in some areas because so many workers are sick or self-quarantining.

The escalating health crisis and growing economic calamity have only underscored the urgency of the country’s vaccination campaign, which has been steadily gathering speed. Officials expressed optimism that they would be able to meet their goal of giving at least one dose of the two-dose regimen to 15 million people over the age of 70 and others in high-risk groups by Feb. 15.

More than 2.4 million people have been vaccinated, according to the government. Of those, more than 388,677 had been given both doses.

Stephen Powis, the national medical director of NHS England, said that the inoculations would gradually lead to a drop in the number of hospital cases.

“But we are not going to see it now,” he said at a news conference on Monday. “It won’t be until we get to February that we are going to see the early signs of that. The vaccination program gives hope, but to battle the virus today, we have to comply with the guidelines today.”