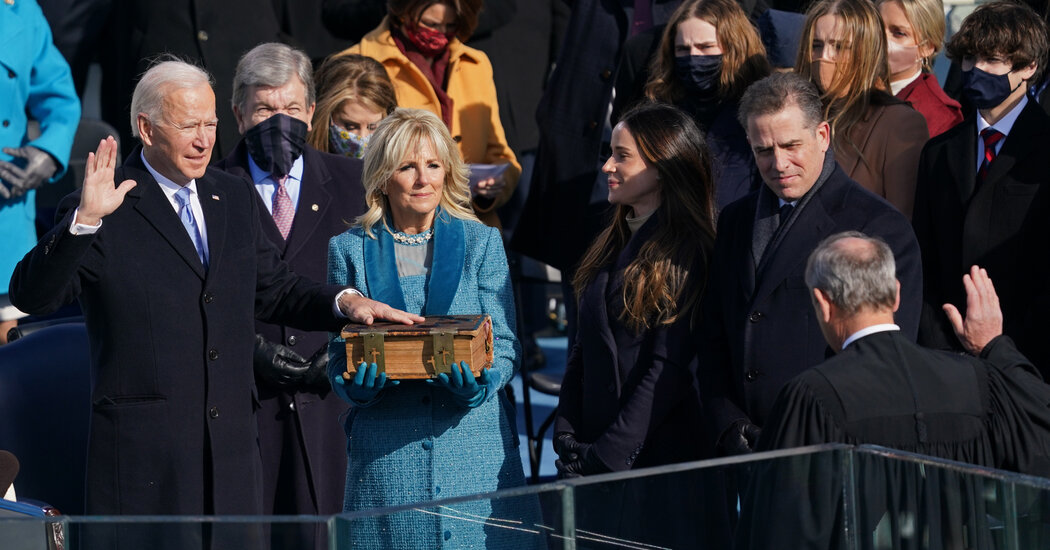 Instead, Mr. Biden reviewed military units at the Capitol and later proceeded to the White House escorted by military marching bands as well as drum lines from the University of Delaware and Howard University, the alma maters of the new president and vice president.

Mr. Biden and his wife, Jill Biden, his son Hunter Biden and his daughter Ashley Biden, as well as a passel of grandchildren and other relatives, emerged from the motorcade to walk the final blocks to the White House, but it was a gesture aimed more at cameras than the crowd because there were more police and National Guard troops than spectators.

Still, one tradition that went forward left an impression. Amanda Gorman, 22, a self-described “skinny Black girl, descended from slaves and raised by a single mother,” became the youngest inaugural poet in American history and drew raves for her powerful words:

“A nation that isn’t broken, but simply unfinished.”

In characteristic fashion, Mr. Trump defied custom by leaving Washington hours before the swearing-in, although Mike Pence, his vice president, did attend. In remarks to supporters before boarding Air Force One, Mr. Trump still could not bring himself to mention Mr. Biden’s name but said, “I wish the new administration great luck and great success.” He did leave the traditional note for his successor, which Mr. Biden later called “a very generous letter.”

Mr. Biden expressed no regret about Mr. Trump’s absence but sought to project common cause with Republican as well as Democratic leaders in the Capitol in a chummy gathering after the ceremony with none of the animus that characterized Mr. Trump’s era. He even tried to persuade them to still call him Joe.

“He makes me call him that, too,” Dr. Biden joked.

“Marriage is about to get rocky, I can tell,” Mr. Hoyer laughed.

Then, in a laying on of hands of sorts by the world’s most exclusive club — a club that never accepted Mr. Trump, who likewise shunned them — three former presidents from both parties, Barack Obama, George W. Bush and Bill Clinton, joined Mr. Biden in placing a wreath at the Tomb of the Unknowns at Arlington National Cemetery. (Jimmy Carter, at 96, was unable to attend, but spoke with Mr. Biden by phone on Tuesday night.)