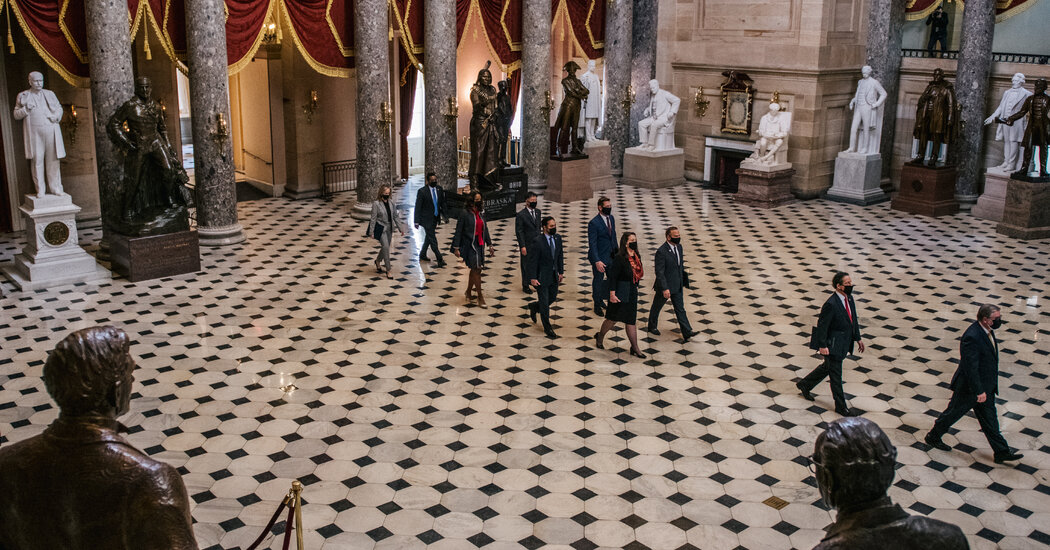 His partner David I. Schoen was sharper, asserting that Democrats were driven by an “insatiable lust” to destroy Mr. Trump. Mr. Schoen warned that they would instead damage the country by setting a new standard to pursue former officials, despite the fact that the House voted with bipartisan support to impeach Mr. Trump before he left office.

“Under their unsupportable constitutional theory, and tortured reading of the text, every civil officer who has served is at risk of impeachment if any given group elected to the House decides that what was thought to be important service to the country when they served now deserves to be canceled,” Mr. Schoen said.

The defense’s case drew perplexed reactions from Republicans, evidently including Mr. Trump, who — barred from Twitter and out of sight in Florida — lacks the public megaphone he frequently used to weigh in on his first trial. The performance prompted at least one Republican, Senator Bill Cassidy of Louisiana, to side with Democrats on the vote to allow the trial to proceed.

“Anyone who listened to President Trump’s legal team saw they were unfocused, they attempted to avoid the issue and they talked about everything but the issue at hand,” said Mr. Cassidy, who had voted last month in favor of a constitutional objection to the trial and was the only Republican to switch his position on the matter on Tuesday. He quickly drew rebukes from the Louisiana Republican Party.

The debate reflected the historic nature of the undertaking. Though in the 19th century the Senate agreed to try a war secretary after he left office, it has never before sat in judgment of a former president. Mr. Trump is also the first president ever to be impeached and stand trial twice, and certainly the only one to require a court of impeachment to don masks and meet in the middle of a deadly pandemic.

With senators in both parties eager to conclude an undertaking whose outcome was clear, they agreed to rules that would allow for an extraordinarily rapid impeachment trial, with a verdict expected as soon as this weekend. It could conclude in as little as half the time of Mr. Trump’s first trial, when senators acquitted him of charges related to a pressure campaign on Ukraine.

The speed reflected Democrats’ fears that pausing to judge Mr. Trump would spoil the momentum behind President Biden’s agenda. Republicans, too, had good reason to want the trial over with, closing a chapter that has been divisive and damaging to their party.