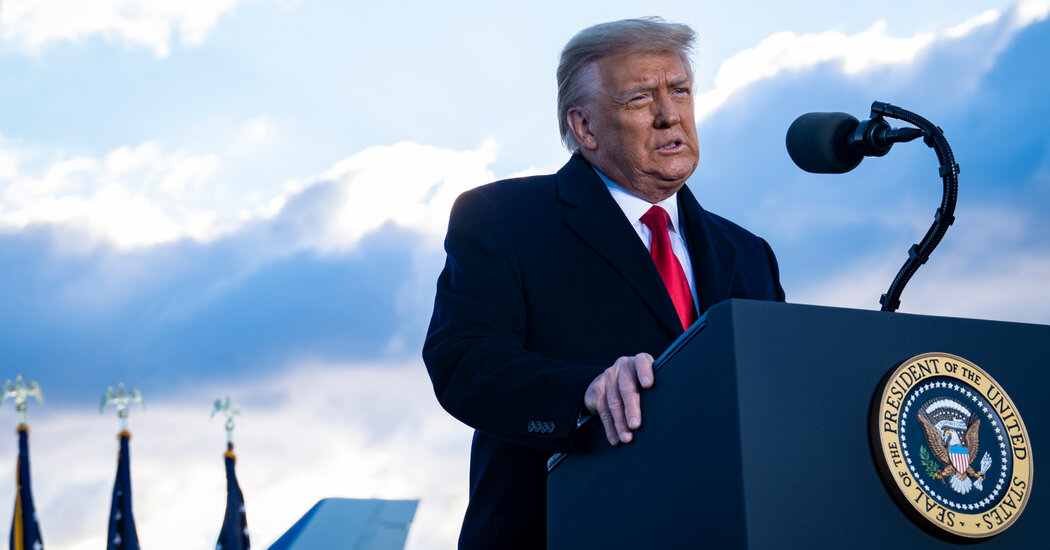 WASHINGTON — The Supreme Court on Monday rejected a last-ditch attempt by former President Donald J. Trump to shield his financial records, issuing a brief, unsigned order requiring Mr. Trump’s accountants to turn over his tax and other records to prosecutors in New York.

The court’s order was a decisive defeat for Mr. Trump, who had gone to extraordinary lengths to keep his tax returns and related documents secret. There were no dissents noted.

The case concerned a subpoena to Mr. Trump’s accountants, Mazars USA, by the office of the Manhattan district attorney, Cyrus R. Vance Jr., a Democrat. The firm has said it will comply with the final ruling of the courts, meaning that the grand jury should receive the documents in short order.

Mr. Vance issued a three-word statement in response to the court’s order: “The work continues.”

The former president criticized the court’s action. “The Supreme Court never should have let this ‘fishing expedition’ happen, but they did,” Mr. Trump said in a statement. “This is something which has never happened to a president before, it is all Democrat-inspired in a totally Democrat location, New York City and State, completely controlled and dominated by a heavily reported enemy of mine, Gov. Andrew Cuomo.”

Under grand jury secrecy rules, it would ordinarily be unclear when, if ever, the public would see the information. But The New York Times has obtained more than two decades of tax return data of Mr. Trump and his companies, and it recently published a series of articles about them.

Mr. Trump, the articles said, has sustained significant losses, owes enormous debts that he is personally obligated to repay, has avoided paying federal income taxes in 11 of the 18 years The Times examined and paid just $750 in both 2016 and 2017.

The scope of Mr. Vance’s inquiry is not known. It arose partly from an investigation by his office into hush-money payments to two women who said they had affairs with Mr. Trump, relationships the president has denied. But court filings by prosecutors suggested that they are also investigating potential crimes like tax and insurance fraud.

The subpoena sought Mr. Trump’s tax records and financial statements since 2011, the engagement agreements with the accountants who prepared them, the underlying raw financial data and information about how the data were analyzed.

As a candidate in 2016, Mr. Trump promised to disclose his tax returns, but he never did. Instead, he fought hard to shield the returns from scrutiny, for reasons that have been the subject of much speculation. In 2019, the United States Court of Appeals for the Second Circuit, in New York, ruled that state prosecutors may require third parties to turn over a sitting president’s financial records for use in a grand jury investigation.

In a footnote to the decision, Judge Robert A. Katzmann said that Mr. Trump’s break with his predecessors’ practice was significant.

“We note that the past six presidents, dating back to President Carter, all voluntarily released their tax returns to the public,” Judge Katzmann wrote. “While we do not place dispositive weight on this fact, it reinforces our conclusion that the disclosure of personal financial information, standing alone, is unlikely to impair the president in performing the duties of his office.”

Mr. Trump appealed to the Supreme Court. In July, the justices soundly rejected Mr. Trump’s central constitutional argument against the subpoena — that state prosecutors are powerless to investigate a sitting president.

“No citizen, not even the president, is categorically above the common duty to produce evidence when called upon in a criminal proceeding,” Chief Justice John G. Roberts Jr. wrote for the majority in that decision.

Though Justices Clarence Thomas and Samuel A. Alito Jr. dissented from other aspects of the decision, all nine justices agreed with that proposition. But the court gave Mr. Trump another opportunity to challenge the subpoena, on narrower grounds.

“A president may avail himself of the same protections available to every other citizen,” Chief Justice Roberts wrote. “These include the right to challenge the subpoena on any grounds permitted by state law, which usually include bad faith and undue burden or breadth.”

Mr. Trump did just that, but his arguments were rejected by a trial judge and a unanimous three-judge panel of the federal appeals court in New York.

“Any documents produced under the Mazars subpoena would be protected from public disclosure by grand jury secrecy rules,” the panel said in an unsigned opinion, “which greatly reduces the plausibility of the allegation that the district attorney is acting out of a desire to embarrass the president.”

“There is nothing to suggest,” the panel added of the information sought, “that these are anything but run-of-the-mill documents typically relevant to a grand jury investigation into possible financial or corporate misconduct.”

Mr. Trump’s lawyers then filed an “emergency application” asking the Supreme Court to intercede. It urged the court to block the appeals court’s ruling while it decided whether to hear another appeal from Mr. Trump.

“Even if the disclosure of his papers is limited to prosecutors and grand jurors, the status quo can never be restored once confidentiality is destroyed,” the brief said. “But the harm will be more than irreparable if the records are publicly disclosed. It will be case-mooting — the strongest possible basis for a stay.”

In response, Mr. Vance’s lawyers — including Carey R. Dunne, who argued the case the first time around; Walter E. Dellinger III, a former acting United States solicitor general in the Clinton administration; and Michael R. Dreeben, a former longtime deputy solicitor general and a member of the team that assisted Robert S. Mueller III in investigating Russian interference in the 2016 election — pointed to the Times articles. The cat, they said, was out of the bag.

“The New York Times has obtained his tax-return data and described that data in depth in a series of articles,” Mr. Vance’s brief said. “With the details of his tax returns now public, applicant’s asserted confidentiality interests have become highly attenuated if they survive at all. And even assuming any remain, they cannot justify extraordinary relief from this court that would deprive the grand jury alone of facts available to anyone who reads the press.”

“This litigation has already substantially hampered the grand jury’s investigation,” the brief said. “No legal basis exists for the extraordinary relief that applicant requests — or remotely justifies the further delay it entails.”