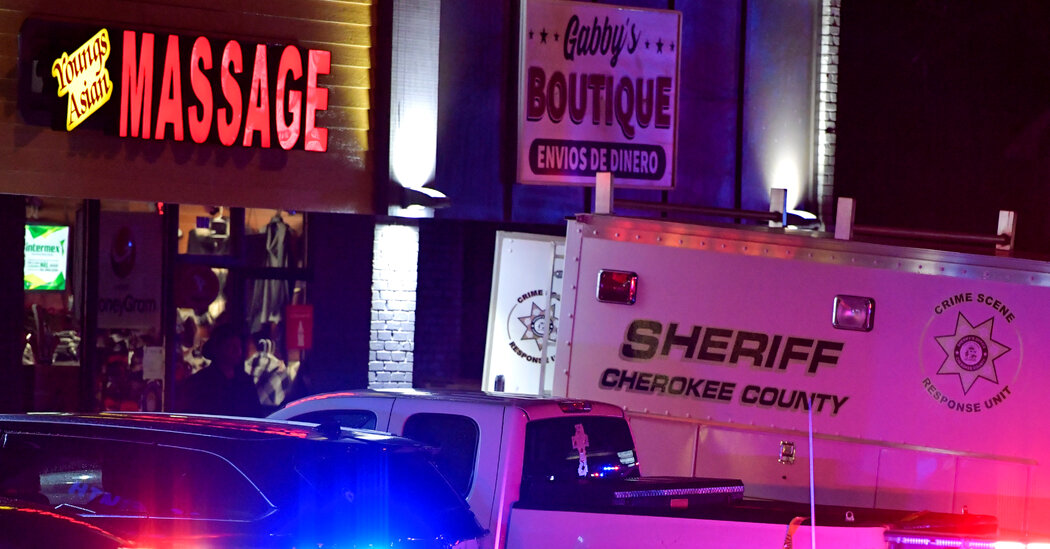 ACWORTH, Ga. — Eight people were shot to death at three massage parlors in the Atlanta area on Tuesday evening, the authorities said, raising fears that the crimes may have targeted people of Asian descent.

Six of the people killed were Asian, and two were white, according to law enforcement officials. All but one were women.

A suspect, identified as Robert Aaron Long, 21, of Woodstock, Ga., was captured in Crisp County, about 150 miles south of Atlanta, after a manhunt, said the authorities, who had earlier released a surveillance image of a suspect near a Hyundai Tucson outside one of the massage parlors.

The motive for the killings was unclear, though the Atlanta police initially characterized the shooting at one of the parlors in the city as a robbery in progress. Officials did not say what type of gun had been used in the shootings.

The suspect in custody is white, and it was not clear whether there was a racial motivation in the shootings. Even so, Stop AAPI Hate, formed to prevent anti-Asian discrimination during the coronavirus pandemic, called the shootings “an unspeakable tragedy” for both the victims’ families and an Asian-American community that has “been reeling from high levels of racist attacks.”

Four people died in the first shooting, at Young’s Asian Massage near Acworth, a northwest suburb of Atlanta, said Capt. Jay Baker of the Cherokee County Sheriff’s Office. That shooting, in which a Hispanic man was injured, was reported around 5 p.m.

Debra and Gregory Welch, who live in the Piedmont Heights neighborhood, said it was usually quiet and peaceful, although they referred to the stretch where the shootings took place as the community’s “red-light district.” On the same block, near Cheshire Bridge Road, there is another massage parlor, a tattoo shop and a strip club.

“It’s for sure disturbing,” Mr. Welch said of the shootings, “but even more so if it’s related to an anti-Asian factor from the Covid pandemic.”

The percentage of Asian-Americans in Georgia has increased in recent decades, and about 7.6 percent of residents in Fulton County, which includes Atlanta, are of Asian descent.

There have been nearly 3,800 reports of hate incidents targeting Asian-Americans nationwide since last March, according to Stop AAPI Hate. The group said the shootings on Tuesday “will only exacerbate the fear and pain that the Asian-American community continues to endure.”

Senator Raphael Warnock of Georgia said on Twitter that his heart was broken by the tragic violence: “Once again we see that hate is deadly.”

Atlanta officials did not ask other massage parlors in the area to shut down as a precautionary measure, the police chief, Rodney Bryant, said at a news conference. But fear was palpable among some who work in the massage industry there. A woman who answered the phone at Healing Massage Spa and identified herself as a manager said that after the shootings were reported on the news, her boss told her to close for the night.

About a 30-minute drive northwest of the Atlanta spas, Young’s Asian Massage is tucked in a modest strip mall, with a beauty salon on one side and a boutique on the other. Like much of suburban Georgia, it is a diverse place, with panaderias and Latin businesses and American-style chain restaurants.

On Tuesday night, the blue lights of police vehicles cast an eerie glow as detectives worked inside the spa.

Rita Barron, 47, the owner of Gabby’s Boutique next door, was with a group of onlookers standing near a used car lot. She said she had been with a customer when she heard noises through the wall that sounded like claps — and then women screaming.

She called 911, and soon saw victims being taken out by police officers.

Nearby, a wail of anguish went up from another cluster of people waiting for any news. Three dropped to the pavement, two of them embracing and shaking as they cried.